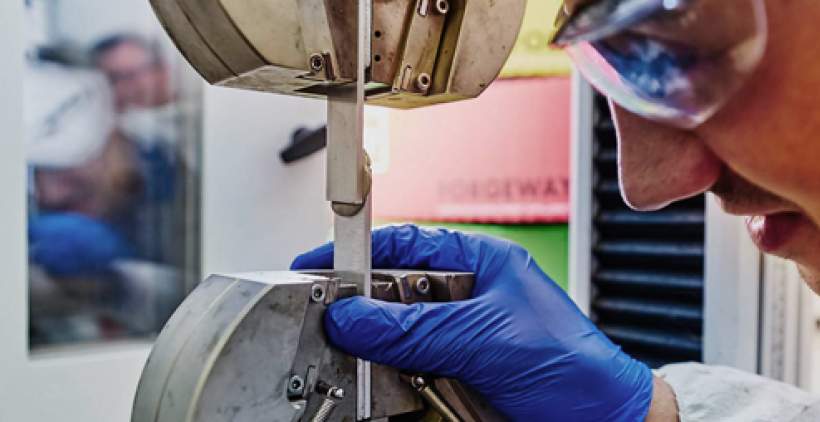 In ensuring all our products are perfectly suited to their end use there are a number of factors we consider.

It’s important to take into account the mechanical properties of an adhesive, as well as establishing the forces or stresses that will occur within a bonded joint. Because of this, the design of the joint is also important in effectively withstanding the forces applied to it.
The ‘modulus’ or ‘tensile modulus’ also has an effect on the suitability of an adhesive. Tensile Modulus (also known as ‘Young’s Modulus’ or ‘Modulus of Elasticity’) is a measure of stiffness of an elastic material. The higher the modulus of a cured adhesive, the less it is able to stretch.

Tensile Modulus is defined as the “ratio of stress (force per unit area) along an axis to strain (ratio of deformation over initial length) along that axis” and can be measured using a tensometer. The jaw separation speed, measured in MPa (Megapascal), is the speed at which the adhesive is pulled apart. The effects of higher jaw separation speeds have less effect on the peak loading (load at break) during testing of lower modulus adhesives. This is due to the higher elasticity of the adhesive absorbing the shock loading.

If the joints are subject to rapidly moving forces or shock loadings, it is often important to simulate these shock loadings with the maximum jaw separation speed. However, to obtain the most consistent mechanical properties of an adhesive or sealant, then a slow jaw separation speed is beneficial. The peak load at break will be lower than that achieved with high separation speeds. The joint design will need to take this into consideration to ensure that the joints will not fail in service.
Tensile and lap shear tensile testing is just one more example of the rigorous testing we carry out at Forgeway.