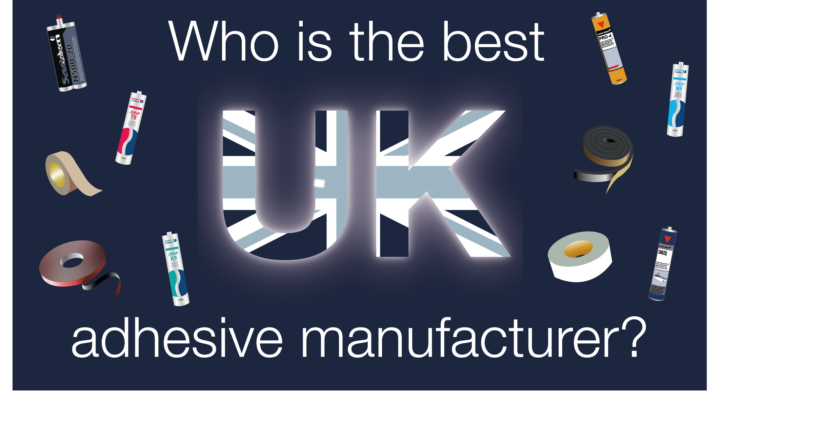 If you are wondering who are the top adhesive manufacturers in the UK, look no further.

You may have done some research on the topic. You may not have done any research at all. But, we know it’s difficult to find one place with all the relevant information.

Here at Forgeway, we have worked in the adhesive industry for over 30 years, manufacturing over 3000 tonnes of adhesives annually. We produce structural adhesives and sealants for large-scale manufacturing companies in industries like aviation, transportation and decorative surfaces.

Having worked with structural adhesives and sealants for so long, we would consider ourselves experts in the adhesive industry and we know who else is among the top adhesive manufacturers in the UK.

And when we say ‘top’ we don’t mean ‘top’ in terms of things that don’t matter.

Topics such as ‘turnover’, ‘employee count’, or ‘number of directors’ are pretty much irrelevant to you as a buyer. You want a manufacturer who can help you through the change process and make it as easy as possible.

By the end of the article, you will have a better understanding of the other companies that we would consider the ‘Top Adhesive Manufacturers’.
We haven’t included ourselves on this list because we understand you may want to know who else can provide high-quality adhesive solutions other than us here at Forgeway.

Who are the top 10 adhesive manufacturers in the UK?

We will start this article off by looking at the top 10 adhesive manufacturers in the UK. If you want to find out the top five global adhesive brands, skip to the next section.

The following list isn’t in any particular order or ranking:

Who are the top adhesive manufacturers globally?

Perhaps the largest and most well known of the adhesive manufacturers in the world.

They specialise in adhesives, but also provide other services too. Cleaning services, building materials, medical equipment, and more are all provided by 3M.

The name 3M derives from the original name of the company, Minnesota, Mining and Manufacturing company. This indicates their original areas of expertise all the way back in the early 1900s.

What brands does 3M own?

Scotch tape is perhaps the most well-known brand that 3M owns, particularly in the adhesive industry. 3M also owns Post-It, Nexcare, and Command among others.

Apart from their specialism in adhesives, Henkel has the most diverse range of products on this list. From hair and beauty products to laundry and toilet care, Henkel is also more consumer-orientated.

They were founded in 1876 by the German, Fritz Henkel and created their first adhesive in 1922.

What brands does Henkel own?

Because of its wide product range, Henkel owns a broad variety of brands. Most people consider Loctite to be their most well-known adhesive brand. A close second place goes to Prit Stick. And along with the adhesive theme, they also own Bonderite.

Henkel’s hair and beauty product range (Schwartzkopf) is perhaps one of the most well-known hair product brands globally. And they also own one of the largest laundry brands in the world, Persil.

What brands does Arkema own?

Bostik, Ashland and Den Braven are the most well-known adhesive brands that Arkema own. Bostik, in particular, is a very renowned name in the adhesive industry.

In 2018, DowDuPont announced it was splitting into three companies. Dow, DuPont, and Corteva.

Out of the three companies, DuPont would qualify to be on our list of adhesive manufacturers. They manufacture speciality chemicals such as adhesives among others.

What Brands does DuPont own?

In terms of adhesive brands, DuPont’s own Corian Solid Surface adhesive would be one of their most well-known. Some would also argue that their LiquidArmor brand is just as well known. Both are well-known and respected brands.

Last, but by no means least, on the list of top adhesive manufacturers globally is Sika. Founded in the earlier 1900s in Germany, Sika provides a range of solutions to the construction, building and manufacturing industry. One of those solutions is adhesives. However, Sika is most well-known for its concrete additive.

What brands does Sika own?

Everbuild is Sika’s most well-known brand. They also supply their own, branded products which have a reputation for high quality.

What to look out for when choosing an adhesive manufacturer

The list below will give you a good idea of the questions you should ask yourself before choosing an adhesive manufacturer to supply you.

These points will give you a good idea of whether the adhesive manufacturer is going to be a good fit for you. But, it still comes down to personal preference. Things like customer service, price, and delivery times are still going to be among the big factors that will help you make your decision.

Which is the best adhesive manufacturer for you?

Choosing an adhesive manufacturer that can help you find an adhesive solution is difficult. We understand that.

This article will have given you a good idea of who might be a good fit. But it’s never easy to know who will be a good fit. As we manufacture and supply adhesives here at Forgeway, we know that the change process can be incredibly difficult. You want an adhesive manufacturer who is going to make that process as easy as possible.

We know that we would be a great fit for you if you are looking for an adhesive manufacturer in the UK who provides a range of structural adhesives, sealants and tapes.

We also know that there are other adhesive manufacturers in the UK. The lists above will have shown you who else you might want to consider. It’s just difficult to know if they will be a good fit for you though.

Ultimately, whatever the problem you are currently facing with bonding, we would love to offer our help. If you want to reach out, book a consultation with a member of our team or email us with your problem. We will happily help provide a solution.

Want to know a little bit more about adhesives? Download our Ebook, ‘The fundamentals of Adhesives’ by following the link below.